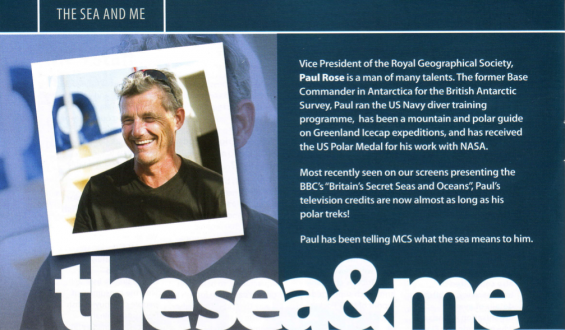 The Sea and Me: Paul tells the Marine Conservation Society what the sea means to him

I grew up in Elm Park, Essex which  felt a long way from the sea and  in the 1960's while I was being generally hopeless at school my life's heroes were in their prime; Hans Haas was using military diving gear to film his fabulous shark documentaries. Jacques Cousteau had co-invented SCUBA diving, written the Silent World and was exploring the world's seas on the ultimate diving expedition on Calypso.

And my big hero at the time, Mike Nelson, was up to his neck in Sea Hunt adventures, beautiful women were hiring Mike for diving lessons and at the end of each programme I felt he was talking directly to me with his words on diving safety.

I can still feel that first dive in 1969; Sideways rain/sleet on Chesil Beach, Portland. Pulling on my home made wet suit (black with yellow tape of course!). Carrying the boat, the outboard engine, fuel and all the gear across the stones, heading out a little way and then – rolling into the sea. You know I really can still feel that moment. It was clear water, I could see the bottom which was about 10 meters, the cool sea rushing into my wetsuit, the fabulous sense of vitality.

Sea squirts! In my 42 years of diving I have  worked with the world's best marine scientists, made hundreds of science support dives under ice in the Antarctic and the Arctic where each dive is a world's first, dived with a six gill shark, manta rays, humboldt squid, whales, sail fish, sun fish and coral life of all kinds.

But, as soon as learned that sea squirts are our closest living relatives in the sea - they are  the closest invertebrate relative to humans and that we share 80 percent of its genetic code, I started to look at them in a new light. Then during my dives for my recent BBC series, Britain's Secret Seas, I discovered that they they fluoresce beautifully at night and the protein from this fluorescence  is used to track cancer cells in patients and is also used for other fluorescing imagery medical techniques.

Not only that but there are promising ongoing studies to see if sea squirts can help us in the battle against Alzheimer's and other diseases. So the humble, common sea squirt always gets my vote! 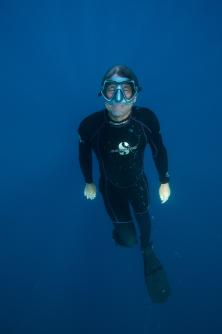 How has the sea changed in your lifetime?

In my lifetime our population has more than doubled which has put our all of our ecosystems services under immense pressure and the oceans in particular; Since I have been a diver we have more than quadrupled our total marine catch. We have developed more efficient means of catching fish, which has resulted in the devastating effects of over-fishing.

Because we have overfished, the fish are scarce - so we have moved into deeper water and we now dredge deep on the Continental Shelves at over 2km deep which results in us scouring the bottom and stripping bare vital habitats that are 100,000’s years old.

Because of our out of control population growth we are commercially harvesting vast amounts of marine life whilst not understanding if it's sustainable - just look at the tons of krill we catch each year. We know very little about the sustainability of Southern Ocean resources and yet we have no hesitation to fish it as much as possible.

This pressure has also resulted in the terrible legacy of marine debris and plastic in particular. There is no more of a sobering site than to see seabirds stomach's full of bottle tops, lighters, bags, net and string. Plus as the plastic breaks down the tiny particles enter our food chain with devastating results.

Our oceans are the largest, most important, least understood and least protected ecosystem on the planet. I feel that in the next 30 years we will turn the situation around - but it's a huge job and there is no time to lose.