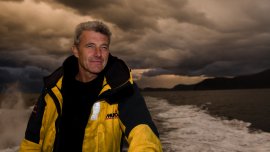 Paul is Vice President of the Royal Geographical Society and Chair of the Expeditions and Fieldwork Division.

He is an expert polar, exploration and field science consultant.

He recently presented the BBC Human Planet Proms at the Royal Albert Hall.

Guest appearances include BBC's The One Show, Child of Our Time, Breathing Places, UKTV Market Kitchen and Blue Peter.