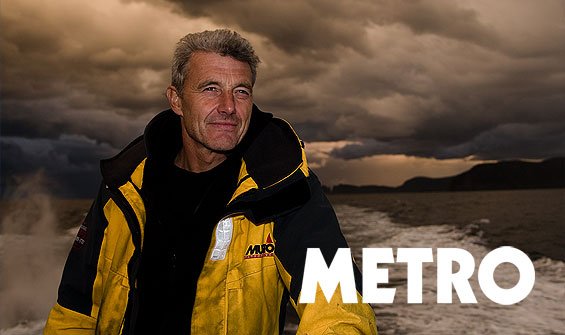 Nature isn't a bottomless pit for our wastes

Diver Paul Rose, who's presented Oceans and Britain's Secret Seas for the BBC, talks climate change scepticism, being 'rubbish' at school and why there's more to the country's waters than people might think. 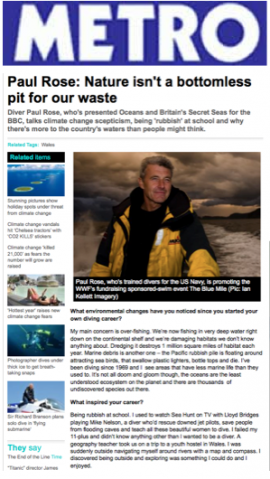 What environmental changes have you noticed since you started your own diving career?

My main concern is over-fishing. We’re now fishing in very deep water right down on the continental shelf and we’re damaging habitats we don’t know anything about. Dredging it destroys 1 million square miles of habitat each year. Marine debris is another one – the Pacific rubbish pile is floating around attracting sea birds, that swallow plastic lighters, bottle tops and die. I’ve been diving since 1969 and I  see areas that have less marine life than they used to. It’s not all doom and gloom though, the oceans are the least understood ecosystem on the planet and there are thousands  of undiscovered species out there.

What inspired your career?

Being rubbish at school. I used to watch Sea Hunt on TV with Lloyd Bridges playing Mike Nelson, a diver who’d rescue downed jet pilots, save people from flooding caves and teach all these beautiful women to dive. I failed my 11-plus and didn’t know anything other than I wanted to be a diver. A geography teacher took us on a trip to a youth hostel in Wales. I was suddenly outside navigating myself around rivers with a map and compass. I discovered being outside and exploring was something I could do and I enjoyed.

What are the highlights of working in the Antarctic as a Base Commander for ten years?

Every dive I did was a world first. I’d dive and ask the scientists later what I’d seen and they said: “We don’t know,” because no one had seen it before. I get excited by simple scenery and it’s all pristine there. The 24-hour sunlight and sense of space is amazing. 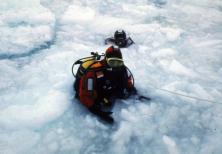 What does the British Antarctic Survey do there?

Scientists use the Antarctic to understand Earth sciences. We can measure what’s happening with the climate by drilling through the ice and looking  at the ice core. You can see lines where the ice changes colour where the industrial revolution started, when nuclear testing started, when Chernobyl happened. We can use that to predict what will happen with climate in the future. You can’t do that anywhere else on Earth where the ice may have been contaminated by habitation.

Does seeing that research yourself leave you frustrated with climate change scepticism?

Yes it does. The scientific community are in consensus about climate change. The main driver is humans. There are nearly 7billion of us and we have to accept that if we’re going to cut down forests and have the industry we need we’re going to affect the planet. Many people look at nature as something there for our use – for medicines, for food, as a bottomless pit for our waste – and  it isn’t. The planet isn’t limitless.

Is there anything left to explore?

People have been to the top of Everest and to the bottom of the oceans – but maybe you haven’t. People may have made that journey before you but you can still do and experience if for yourself and maybe find new things.

Did anything surprise you when you made your TV series Britain’s Secret Seas?

The series surprised people because there’s this image of Britain’s waters being murky and gloomy and we showed there’s more to it. The sea squirts off Scotland surprised people. They’re our closest living relative in the oceans because they have vestiges of the same spinal chord we have.

They’re fluorescent at night, which is beautiful, but it’s due to the same protein the medical industry uses to track cancerous cells in humans. I want to show people more things like that – to show how much the ocean ecosystem gives us.

Paul is promoting the WWF’s fundraising sponsored-swim event The Blue Mile on September 4. For more information, go to wwf.org.uk/bluemile