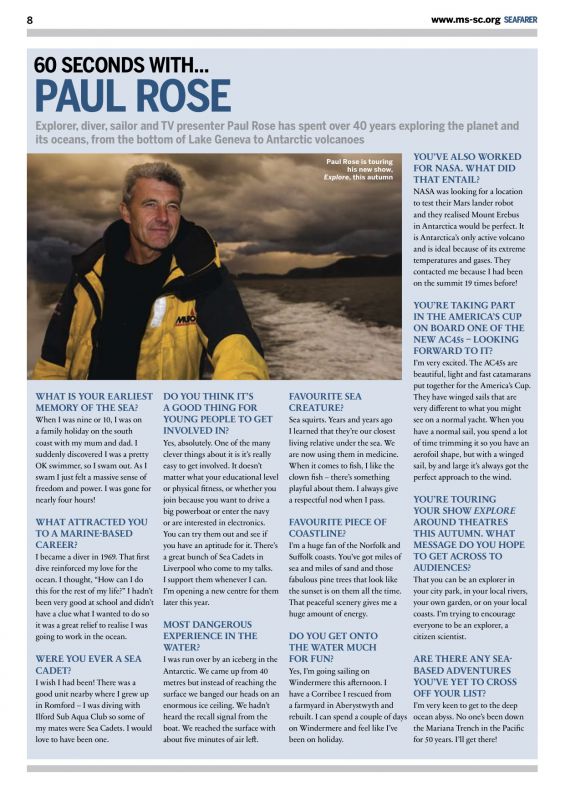 Explorer, diver, sailor and TV presenter Raul Rose has spent over 40 years exploring the planet and its oceans, from the bottom of Lake Geneva to Antarctic volcanoes.

What is your earliest memory of the sea?
When I was nine or 10, I was on a family holiday on the south coast with my mum and dad. I suddenly discovered I was a pretty OK swimmer, so I swam out. As I swam I just felt a massive sense of freedom and power. I was gone for nearly four hours!

What attracted you to a marine-based career?
I became a diver in 1969. That first dive reinforced my love for the ocean. I thought, “How can I do this for the rest of my life?” I hadn’t been very good at school and didn’t have a clue what I wanted to do so it was a great relief to realise I was going to work in the ocean.

Were you ever a sea cadet?
I wish I had been! There was a good unit nearby where I grew up in Romford – I was diving with Ilford Sub Aqua Club so some of my mates were Sea Cadets. I would love to have been one.

Do you think it’s a good thing for young people to get involved in?
Yes, absolutely. One of the many clever things about it is it’s really easy to get involved. It doesn’t matter what your educational level or physical fitness, or whether you join because you want to drive a big powerboat or enter the navy or are interested in electronics. You can try them out and see if you have an aptitude for it. There’s a great bunch of Sea Cadets in Liverpool who come to my talks. I support them whenever I can. I’m opening a new centre for them later this year.

Most dangerous experience in the Water?
I was run over by an iceberg in the Antarctic. We came up from 40 metres but instead of reaching the surface we banged our heads on an enormous ice ceiling. We hadn’t heard the recall signal from the boat. We reached the surface with about five minutes of air left.

Favourite sea creature?
Sea squirts. Years and years ago I learned that they’re our closest living relative under the sea. We are now using them in medicine. When it comes to fish, I like the clown fish – there’s something playful about them. I always give a respectful nod when I pass.

Favourite piece of coastline?
I’m a huge fan of the Norfolk and Suffolk coasts. You’ve got miles of sea and miles of sand and those fabulous pine trees that look like the sunset is on them all the time. That peaceful scenery gives me a huge amount of energy.

Do you get onto the Water much for fun?
Yes, I’m going sailing on Windermere this afternoon. I have a Corribee I rescued from a farmyard in Aberystwyth and rebuilt. I can spend a couple of days on Windermere and feel like I’ve been on holiday.

You’ve also worked for NASA. What did that entail?
NASA was looking for a location to test their Mars lander robot and they realised Mount Erebus in Antarctica would be perfect. It is Antarctica’s only active volcano and is ideal because of its extreme temperatures and gases. They contacted me because I had been on the summit 19 times before!

You’re taking part in the America’s Cup on board one of the new AC45's – looking forward to it?
I’m very excited. The AC45s are beautiful, light and fast catamarans put together for the America’s Cup. They have winged sails that are very different to what you might see on a normal yacht. When you have a normal sail, you spend a lot of time trimming it so you have an aerofoil shape, but with a winged sail, by and large it’s always got the perfect approach to the wind.

You’re touring your show Explore around theatres this autumn. What message do you hope to get across to audiences? 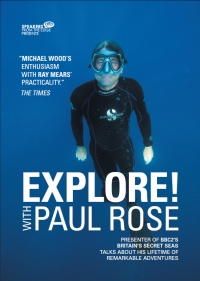 Are there any sea- based adventures you’ve yet to cross off your list?
I’m very keen to get to the deep ocean abyss. No one’s been down the Mariana Trench in the Pacific for 50 years. I’ll get there!