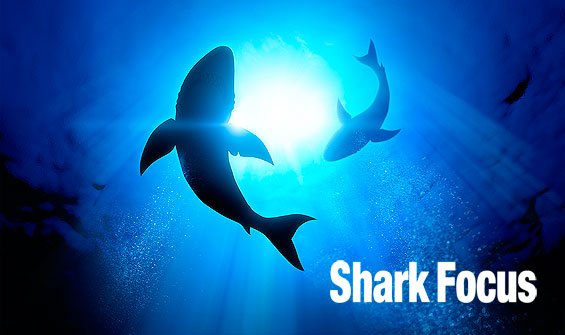 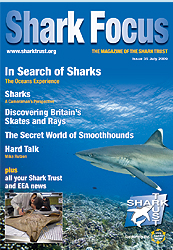 Six Gill Shark - Mediterranean
This was my last chance to intercept a 200 million year old shark; I had made two exhausting midnight dives and had failed to make contact. I’d followed the local advice which was to dive in the dark of a new moon and my divers sense told me to dive at slack water so that the turbulent waters of the Straits would be at least manageable for me.

The currents in the Straits of Messina reach 6 knots and conspire with whirlpools, overfalls, upwellings and standing waves to make these waters unfriendly to even the largest ships, difficult for local fishing vessels and unworkable for divers.

To extend my search area I decided to dive at 0130, the end of the slack water period. This would mean I would travel faster as the dive progressed and therefore cover more ground. I assembled the largest twin diving cylinders I could find and convinced the dive shop to pump up the cylinders way over the normal safe working pressure. This would give me about 10 minutes more underwater.

And as a final secret weapon I added a 4kg lump of fresh tuna tied onto my weight belt. I thought it was worth a try – just maybe it would make the difference and get this elusive shark interested in me.

It was delightful to head out into the darkness of the Straits. At last we could get away from the disco music! You need to be well focussed before a challenging dive and some extra effort is needed in the Straits as the nightclub music, racing motorcycles and fast cars all blast noise over the water. I felt caught between time and cultures; I was blocking out disco music, my boat was surging to the powerful currents so feared since mythological times and below me was a prehistoric shark.

It was pure joy to leave the boat and feel the water take the weight of me and the heavy dive gear as I descended through those dark waters. As I levelled out at 37 meters I could just make out the shallower parts of the bottom as I raced over them in the grip of the current. After 30 minutes no luck.

I began to think it was all a bit too ambitious and even allowed myself the luxury of beginning to wonder how I was going to be picked up at the surface – was the boat able to follow my bubbles? My underwater communications were very unreliable due to the layers in the water above me so I had not heard from them at all. I had to rely on my surface team to follow those bubbles as I would need to decompress on an oxygen cylinder hanging from the boat or I would get the bends.

And then – being safe on the surface was the last thing on my mind. Ahead of me glowing through the darkness were two green eyes! It was a beautiful six gill shark about 5 meters long swimming up current and heading straight for me. I was about to chase it, but amazingly it turned back and joined me on my drift with the current.

Diver contacts with six gill sharks are so rare that I expected this to be just a fleeting meeting, but it stayed with me, swimming all around me in all positions. Even becoming vertical, head-up for a minute. I couldn’t resist it and had to touch it as we cruised the black Straits together. Time was short. I only had a few minutes of bottom time left and just wanted to be there when it swam off – but it just stayed with me until I couldn’t stay a moment longer. It was wonderful to begin my long ascent and see the shark continuing the drift. I soon lost it in the dark but I could see those green eyes until I had ascended a long way.

Without those extra ten minutes of dive time I would have never made it. Ten minutes to put a species of 200 million years into a human scale.

Hammerhead Sharks - Red Sea
It’s a great experience to dive on a re-breather – the totally silent operation, no bubbles and stacks of available time underwater, meant that I felt genuinely at one with the Red Sea. The only problem I had was that I couldn’t see the hammerhead sharks for all the fish that were around me. 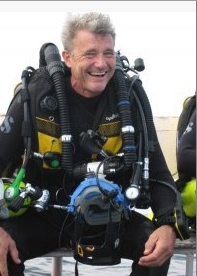 The abundance of marine life in the southern part of the Red Sea is just astounding. The warm, highly saline, nutrient rich, beautifully clear waters are home to corals of every type and size and over 1100 species of fish of which 20% of them are found nowhere else.

I did expect to have a lot of fish company when I was on the reefs, but even when I continued my shark hunt at depth into the big blue I still became part of a colourful school. At one point I caught my cameraman in the corner of my eye and as I turned to face him realised that it was in fact a massive Sailfish that had been accompanying me.

I was looking for hammerhead sharks here because this is one of the very few places in the world left where they aggregate in large groups. There was every chance I would see a group of 50 or 60 of these most iconic of the sharks.

They really are the Eurofighter Typhoon Jet of the ocean. And I was desperate for a close encounter. I wanted to actually see that incredibly effective wing shape, the stereoscopic nostrils and the arsenal of electro and chemical receptors in the leading edge, all in action. The only way to really begin to understand these things is to swim with them.

Hammerheads hunt at the abrupt temperature change layer, the thermocline. I felt the sudden change to cool water at 35 metres and along with my entourage of reef fish and grey reef sharks I began the search in earnest. It looked hopeless to me because I knew the hammerheads would come cruising past at speed so I had to be ready. I kept mistaking the big pelagics at the very edge of visibility for sharks. Plus my own personal fish mates made concentrating impossible.

I went deeper to over 40 metres and then swam out away from the wall into the big blue. It is a beautiful feeling. And then I just waited. There is not much point in trying to cover big distances in this situation as the distances involved are vast and of course the hammerheads are so fast they make my attempts to hunt them look futile. So I like to just hang there in mid-water and wait.

After an hour I spotted a group of grey shapes coming towards me and within a few seconds they were close enough for me to see that they were indeed hammerhead sharks. There were about 50 of them travelling north at my depth, just below the thermocline.

Suddenly they were only 20 meters from me and moving past me fast. As they closed on me it was hard not to feel a bit vulnerable at first – they just look to be the consumate hunter. I was imagining what it must be like to travel the ocean with their most fantastic navigation instruments that mean they can detect magnetic and electric fields in the sea down to half of a billionth of a volt. They use their sensitive temperature sensors to find the thermocline layers which means they make best use of their oxygen useage and find more prey. They are wing-shaped in cross section and with the head acting as an aerofoil they are unimaginably manoeuvrable – athletes of the sea. And the nostrils are located at the ends of the hammer leading edge so they really do smell stereoscopically. Ultimate hunters indeed. I was quite pleased that they didn’t show much interest in me.

It was all over too quickly. They just peeled off into the distance and it was time for me to begin my long trip to the surface. I’d been down deep enough and long enough that I had to make a 20 minute decompression stop before I could surface.

It’s normal to get a bit bored hanging around at the stop, but this time I had rejoined my school of fish. They stayed with me for a few minutes, then shot off when the Grey Reef and Silvertip Sharks came over for a close look. When the sharks were further out on their circuit of me the school came back. And so it continued for the whole time, only broken up by another visit from a giant sailfish.

I spent the rest of the time at the stop with my thoughts about the unbelievable reality that hammerhead shark numbers have declined so much that they are now on the Red List as “globally endangered” and as impressive as this group of 50 was, it was only 20 years ago that this group would have been in the hundreds.

And the reason for this decline? It’s us. We kill 100 million sharks a year for the fins.