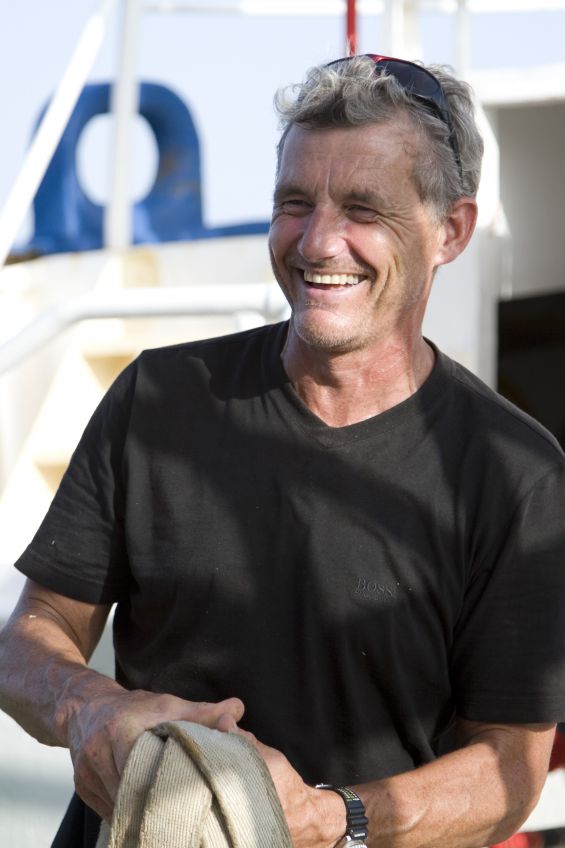 Each month Real Travel features a short interview/question & answer section with a ‘real traveller’. We have included travel writers, travel presenters, photographers, people from the industry etc – anyone who has a real passion for travel and is of interest to our readers. Considering you’ve taken part in so many adventures that have been in the public eye, I think our readers would enjoy hearing more about you and the trips you take part in.

How did your passion for exploring the world begin?

I grew up in Elm Park, Essex and was generally hopeless at school. I remember the early 1960’s when my life’s heroes were in their prime; Hans Haas was using military diving gear to film his fabulous shark documentaries. Mike Nelson was up to his neck in Sea Hunt adventures saving downed jet pilots and beautiful women were hiring Mike for diving lessons. And Jacques Cousteau had invented SCUBA diving, written the Silent World and was exploring the world’s seas on the ultimate diving expedition on Calypso.

When I was in Secondary school, my Geography teacher stepped outside of the classroom and all the horrors that it held for me, and took the class out to the Brecon Beacons. It was truly inspirational. At last things were making sense to me; If I wanted to use a map and compass then I needed Maths. If I wanted to understand the map and the ground, then I needed to think about Geography!

I shall never forget how alive and in-tune with Nature I felt those days peeling spuds at the Merthyr Tydfil Youth Hostel after a day in the hills.

What has been the highlight of your travelling life so far?

So many! But one huge highlight was being the expedition leader for BBC Oceans. It was a marvellous year and a huge challenge. Involving;
Over 1000 dives
Over 700 hours underwater
8 expedition ships - which ranged from a beautiful hand built yacht, to a worn out converted cargo ship and finally a brilliant Norwegian icebreaker.
Our brilliant team of 30 people travelled the world with 2 tons of equipment which we packed, carried, shipped, assembled, repaired, loved and hated.

What has been you greatest challenge to date?

Climbing Denali (Mt McKinley) in Alaska. I reached the summit on my third attempt. Denali is a fabulously beautiful mountain and I was a newly qualified mountain guide and keen to guide on it. My good friend Al and me almost killed ourselves trying to force it when we had bad conditions up high. Finally we learned that by being more patient and understanding of the conditions we could do it. I followed our success by guiding Denali and then more recently, leading Greenland Icecap Crossings and leading Greenland mountaineering expeditions.

What would be your ultimate voyage of discovery?

Please can I have two 2?

Working to support science on the International Space Station is my dream. I thrive on refreshing my perspective of our planet by being in challenging, remote, deep or high places. I get very excited when I think of being an astronaut – and this may seem contradictory, but it’s how I feel when I’m diving in caves. Cave divers use the term “inner space” and it’s so very true that the high demands of cave diving are in the same skill set as astronauts.

I also dream of exploring the oceans deepest parts;
At 11,033 metres (36,201 feet) The Marianas Trench is the deepest part of the oceans and as a young boy I remember hearing about the Trieste expedition when Don Walsh and Jacques Piccard were the first to make the descent. I would love to get down there.

I love the the sense of the vast unexplored space;

The oceans contain over 99% of the living space on the planet.
Scientists estimate that there are at least a million new species to be discovered in the deep oceans. A new species is discovered during almost every deep sea dive
Oceans cover 71% of our planet and if the land heights and oceans depths were averaged out, the land would be 800 meters high and the oceans would still be 3,800 meters deep.
It’s a vast, almost immeasurable space and less than 10% has ever been explore by man.

What has been your most memorable underwater adventure?

The Black Hole on Andros Island, Bahamas is a one-off. Nothing like it exists anywhere else on earth. That alone made it a great diving expedition target for BBC Oceans.

The water at the bottom of the black hole is covered by a hydrogen sulphide producing bacteria layer. This is a neuro toxin that is rapidly absorbed through the skin, so as I descended I could feel and smell my whole body being permeated by the chemicals. It smells like very strong rotten eggs. The bacteria layer also produces a lot of heat  and is uncomfortable at 36C. The layer is so dense that visibility is zero, the only thing I could see was bright purple and green layers against my mask.

The water below the layer was how all of our seas were 3.5 billion years ago. That black water with such a dead feeling is a long way from the beautiful oxygen-rich, life giving oceans we have now.

Looking up I could see great tendrils of purple bacteria and bright green holes where my exhaust bubbles temporarily made holes in it. I made two dives in the Black Hole and spent a long time on each dive exploring the amazing layer. The whole team felt a bit odd and ill after the dives. I felt fine, but my hair had gone gold!

Which destination has provided you with the best diving opportunities?

When I was the Base Commander of Rothera Research Station in the Antarctic I was also the Institute Diving Officer and responsible for diving support for the marine scientists. We set up the diving operation from scratch, which meant that every single science dive was a first. It was a wonderful sense of discovery!

Do you have an essential piece of kit that you always travel with?

‘Elacin’ made - to - measure earplugs! They are just brilliant and I highly recommend them. Not cheap, they cost about £100 and you can get them from hearing specialists. Perfect for sleeping on noisy boats, in storm–bound tents or airplanes.

What is the best piece of travelling advice that you’ve ever been given?

“Put your boots on and go”. H W Tilman gave this advice to people who wrote to ask him how to get on an expedition. I read it many years ago and now offer it as advice. There are plenty of perfectly sea worthy boats and well fitted out expeditions that aren’t “quite ready yet” so never leave. You’re better off doing whatever preparation and planning you can afford and then just go!